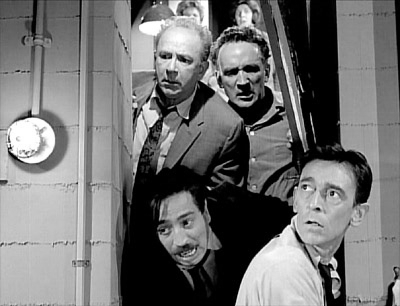 When Panic Sets In, the Neighbors Invade the Doctor's Basement to Break into His Shelter 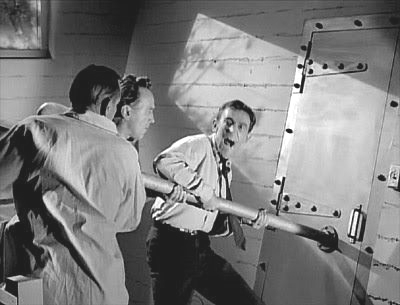 When the Doctor Won't Let Them In They Ram the Blast Door, Destroying It and the Shelter

It is a typical evening in a typical suburban community. At the residence of physician Bill Stockton, he enjoys a birthday party being thrown for him by his wife Grace and their son Paul. Also at the party are Jerry Harlowe, Bill's brother-in-law; Frank Henderson and Marty Weiss, Bill and Jerry's former roommates; and the wives and children of Jerry, Frank, and Marty. Bill is well known and liked by this gathering; he attended the State University with Marty, Frank, and Jerry. Moreover, Bill has repeatedly administered to the health and well-being of each one of said guests and/or delivered their children. Everyone is especially friendly and jovial, even when mention is made of Bill's late-night work on a fallout shelter which he has built in his basement. Suddenly, a Civil Defense (CONELRAD) announcement overheard by young Paul is made that unidentified objects have been detected heading for the United States. In these times, everybody knows what that means: nuclear attack.

As panic ensues, the doctor locks himself and his family into his shelter. The same gathering of friends becomes hysterical and now wants to occupy the shelter. All of the previous cordiality is now replaced with soaring desperation; pent-up hostility, searing nativism, and other suppressed emotions boil to the surface. Stockton offers his basement to the guests, but the shelter itself has sufficient air, provisions, and space for only three people (the Stocktons themselves). The once-friendly neighbors do not accept this; they break down the shelter door with an improvised battering ram. Just then, a final Civil Defense broadcast announces that the objects have been identified as harmless satellites and that no danger is present. The neighbors apologize for their behavior; yet Stockton wonders if they have destroyed each other without a bomb.

Read this analysis about backyard shelters

This page is based on the copyrighted Wikipedia article The Shelter (The Twilight Zone). it is used under the Creative Commons Attribution-ShareAlike 3.0 Unported License (CC-BY-SA). You may redistribute it, without graphics owned by The Vivos Group, verbatim or modified, providing that you comply with the terms of the CC-BY-SA